We have great news for those who prefer the competitive side of Xonotic. First, let’s take a look at the recent happenings since we last gave word about the ongoing Xonotic 1v1 tournament!

The semifinals were played between fisume vs PCLizard and L0 vs Mirio, with PCLizard and L0 winning respectively. You can watch the matches along with their commentaries on morfar’s twitch.tv account.

In the winner brackets finals PCLizard won against Lo after great fights on 3 separate maps (Warfare, Xoylent and Final Rage)****. You can watch the matches with commentaries from kojn and Mirio below:

The loser brackets _finals _were played on the maps Warfare and Darkzone between fisume and L0, with the winner turning out to be fisume. With that win fisume earned a ticket to the grand finals! GG for both players and congrats to** L0**, who wins 3rd place in the tournament!

The first Xonotic 1v1 online tournament ends on Sunday 19.02.2012 20:00 CET,  when fisume and PCLizard will have their ultimate showdown to decide who’ll be the winner of the GRAND FINAL! The matches will be played at the regular place (the eXile 1on1 Tournament Server X), and as usual, there will probably be a screencast too. For more information check out the tourney thread on the official Xonotic forums, or join #xonotic or #xonotic.pickup on IRC (irc.quakenet.org)! 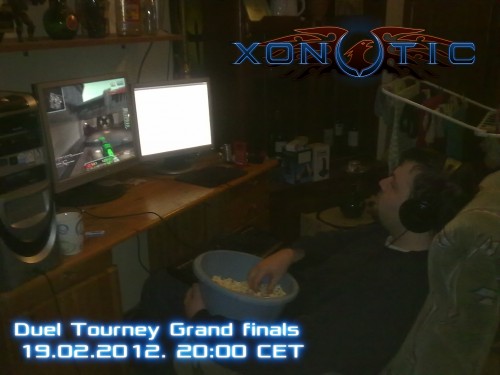